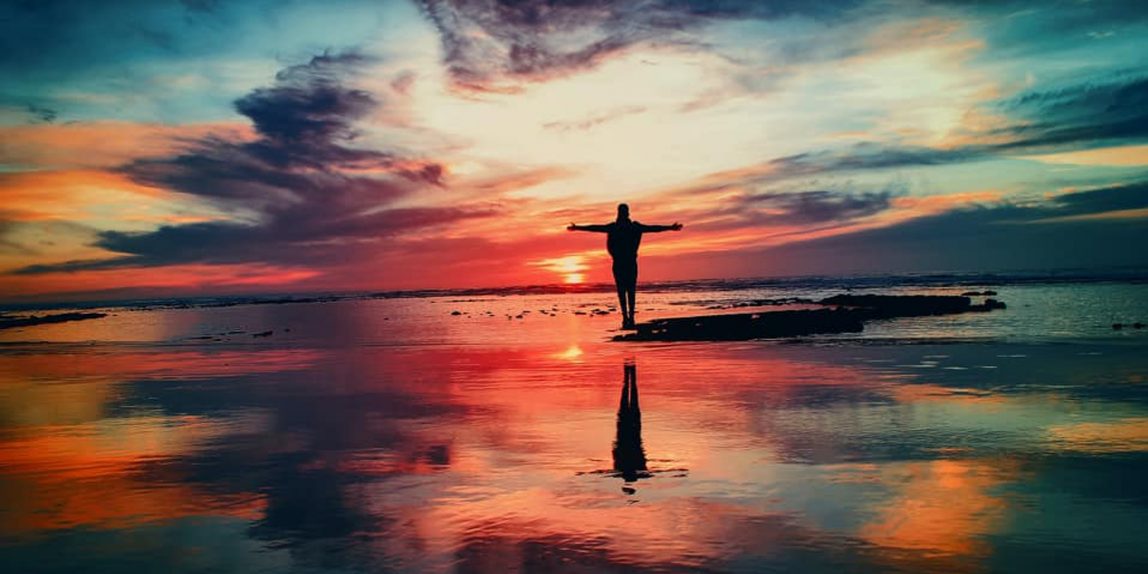 All the concepts developed here come from Taoism. To facilitate the understanding of this text, these concepts will be explained in modern language without Chinese terms, or so little…

In our view, the universe operates according to three spheres: Earth, Man, Heaven (Sky). This worldview establishes this trilogy for a consistent cosmology. These three elements are, in Taoism, at the Man’s level, the three treasures: jing (essence), chi (energy) and shen (spirit).

We, as human beings, are situated between heaven and earth. The earth is the nature but also the whole Yin, the manifested.

To address this question on the manifested versus the unmanifested, let’s take an example: imagine that you hit a table with your hand. Faced with this possibility, several cases can occur; either you fear the pain it could create (without being sure that it’s actually going to be painful). Either you think about everything but the pain, and are wondering what I’m talking about. The gesture, the possible pain, the full sensation of this action fall within the scope of “potential”, everything is possible but we do not know what will be in the reality of action. We are in the unmanifested, the idea.

Now hit your hand on the table. Either it hurts you or it does not hurt you, but in both cases there is something going on in the physical reality. Part of the imagined action’s potential is realized, felt. In the feeling, or on the feeling, is grafted a myriad of thoughts that have nothing to do with the planning  of the action, the action itself and its results. We are in the manifested, that in it’s “birth”, can be perceived. The original perception is hardly recognizable, because it is automatically tinted by thoughts that are only there to give vital limits to our ego, to reassure us.

Now let’s get to the history of the ego. Very young, we do not disassociate ourselves from the things around us (before two / three years old), we are not separated from the world. Very soon, our entourage will explain that there is a difference between others and us, between us and the rest. After that, our perceptions will be slowly being invaded by thoughts, every action and perception will be “translated” by our thoughts for our mind. The reality will no longer be seen as what it is, but as what our mind makes it to grow our individuality, the difference between us and the world, this singular image to which we attach so much, the ego. This is the death of spontaneity. Being right, making discriminating choices to impose our thoughts are reinforcing mechanisms of the limited coherence that is our ego. The ego loves limits, rules, and what is understood by the intellect. He does not like the limitless, which can not only be understood by the five senses and what is not intellectual. The ego loves religion and can not love nondual spiritualities.

Now back to the three elements. On one side we have the Earth (yin manifested). On this yin is born the human being who will live in the world. On the other hand we have the Heaven that represents what is not of this earth (yang unmanifested).

In Man, we find the same three levels of understanding of the phenomena: body, energy and intellect. The body is our mechanical structure which operates in a global homeostasis, in a physiological balance. Hopefully, everything goes well, but if a part does not go well, a series of compensations will unbalance the body to compensate for what is not working perfectly. To put it simply, nothing really goes well in the body, but everything is done to make sure that the balance is held as a whole … but consequently it is a delicate balance.

Energy is what allows us to enter into the world of perceptions of the body while already in the subtle. You can “feel” the energy, but most of the time you in fact only feel “manifestations” of this energy: heat, tingling, numbness …

We can only feel the energy when we open the door to subtle senses, freed from the comments of the mind and  through the relaxation of the body.

Then there is the mind, the world of thoughts, which can not be seen and have no direct effect on the physical body.

It is the interaction between these three spheres that interests us. The body, in its tensions will cause the mind to comment and judge his own state. Thoughts will create an inner tension that results from the inability to move in the direction of all the comments that we do, of all the things that we imagine. These judgments and the non-acceptance of what is, these internal and external tensions, will manifestations that come from the mind and feed on energy: emotions.

Emotions are thoughts that will pass from the unmanifested to the manifested, through the energy of the mind to the body. Emotions are mental, created by our mind and source of new comments themselves. But they are also physical, as they are directly related to energy and body organs. Emotions are the bridge between the head and the body. They are the first cause of internal diseases in Chinese medicine. Mental stress, generated by repressed thoughts, will create a physical tension that will be underlying and emotion. This physical tension will be commented by the mind intellectually and become a source of rehashing that brings emotional stress. This vicious circle is the source of emotions that will last for months instead of a few seconds, of physical tension that will have no medical solution, sleep loss that can not be improved with chemicals …

It should be understood that emotions, natural and inevitable, are the result of an internal tension and / or and external tension, just as fatigue is the result of the operation the being. Emotions are signs of disturbance of the peace in the functioning of the body / mind.

The etymology of the word “emotion” comes from the Latin “emovere” which means “shake, move”. From Old French, the term emotion is used in the sense of “what is disturbing peace” rather than a sense of movement which will be the word “move.”

Far be it from me to say that we should control, limit or suppress emotions, it would be silly! But in the understanding of their functioning, it is possible to “surf” on them, or with them, rather than being drowned in the roll of a wave that carries everything and makes us victims. This is the difference between someone who is witnessing an accident and who is the victim of this accident.

In the understanding of what we have just said, and from the Taoist school of ours, how can we go in this merger with the emotions, which allows us to live them without being their victim? We have three possible approaches: one by the body, the other by the mind and by the last one through energy.

We now understand why the mental approach, which is the source of emotion, seems complicated and difficult to use. Emotion is a feeling of the ego, good or bad, but that makes it alive and strong. Every strong emotion that overtakes us gives us limits and reasons to get into compulsive thoughts which make the happiness of the ego. Any attempt of release through the intellect forgets that 50% of emotions is physical. For all that is physical, it must go through the physical approach.

The physical approach seems interesting, but  we  are often simply wrong in our perceptions, mislead by our internal comments that develops interpretations of what we perceive. This solution still seems less dangerous than the mental approach.

In fact, emotions are primarily a manifestation between mind and body, we can use the term “energy.” for them.  They are correspondence with the human sphere. The energy approach requires some education, an awareness, and real learning.

In our school, we will work with emotions in three stages:

Through a practice of the body, creating circulation and relaxation, we can feel better  the onset of emotion in its creation, even before its manifestation in the body.

We will experience areas of the body that are most affected by certain emotions and learn to let them relax in the acceptance and relaxation of the emotions. In a conscious expectation of all the mechanisms of our body / mind, we will enter a phase of silence where any mental or emotional event is obvious.

Not being “disturbed”, but living fully with ourselves, this is our idea.